Director of Diversity, Equity, & Inclusion, Board of Directors 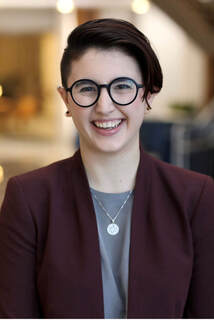 Elliot Draznin is a nonbinary trans Financial Advisor for the LGBTQ community of Cincinnati. They grew up in northern Virginia and game to Cincinnati for the University of Cincinnati, graduating in 2020.

While at UC they were involved with the LGBTQ Center programming and mentoring, as well as Out In Business through Lindner. They were the president of the Jewish sorority, Sigma Alpha Epsilon Pi, receiving a President of the Year Award from the National office, and are now an advisor for a chapter in Boston.
​
Currently they serve on the Jewish Federation Board of Trustees, the ish Finance and Governance Committee, and as well as the Cincinnati Pride Board. They are currently co-creating an LGBTQ Jewish prayer group called elech and a professional networking group for the Cincinnati queer community, called Cincinnati Queer Networking Group.
©2022 THE CINCINNATI PRIDE LOGO AND NAME ARE REGISTERED TRADEMARKS OF CINCINNATI PRIDE, INC. ALL RIGHTS RESERVED