Director of Compliance, Board of Directors 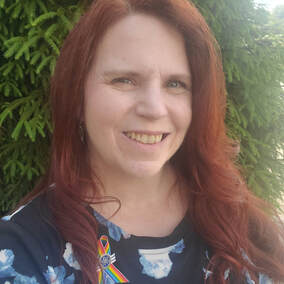 ​Jen Scott (she/her/hers) is a native Ohioan from Forest Park, Ohio. She attended Northwestern University earning a degree in Chemistry.  After returning to Ohio, she embarked on a successful career in information technology and established her own consulting firm. In 2015, she began another path in life, that of a community organizer and grassroots activist. She became very involved with the atheist and secular movement, driven by a passion for separation of religion and government. She believes strongly that an individual’s right to religious freedom should not infringe on the rights of others. In 2016, she co-organized a direct-action campaign which drew international attention to raise awareness of the anti-LGBTQ+ hiring practices of a tourist attraction in Williamstown, Kentucky. In 2018, she was recognized as Activist of the Year by the national civil rights organization American Atheists. That same year, she joined their board of directors as Treasurer. In 2019, she co-founded the Community of Reason (COR): Atheists and Humanists of Ohio and Kentucky based in Cincinnati. COR envisions a secular society that values science, reason, integrity, compassion and true equality for everyone. She also serves on the boards of Community Shares of Greater Cincinnati, the board of the Kentucky Freethought Convention, and is a founding leader of the Multifaith Coalition of Greater Cincinnati/Northern Kentucky.

She brought her passion for advocacy to Equality Ohio when she joined their staff in 2019 as the Southwest Ohio Regional Organizer. In her day job, Jen supports municipalities to implement LGBTQ+ inclusive policies, educates the public, connects and empowers the LGBTQ+ community in southwest Ohio.

Jen joined the board of Cincinnati Pride in 2018. She currently serves as Director of Compliance, Parade Committee Chair, Interfaith Committee Chair, and co-Chair of the DEI Committee. Her commitment to Cincinnati Pride comes from her desire for our community to remain visible, vibrant and active.
​
In her free time, she enjoys science fiction/fantasy movies/books, and is an award-winning basket weaver.
©2022 THE CINCINNATI PRIDE LOGO AND NAME ARE REGISTERED TRADEMARKS OF CINCINNATI PRIDE, INC. ALL RIGHTS RESERVED